That's cruel (and I wish I'd thought of that)

Folks in Orange County bash  Octomom (not her real title) Nadya Suleman more than other Americans, mostly because she's right there in our backyard and we have to look at her. For the time being she's in the northwestern OC community of La Habra, in a home that's about to be foreclosed.

And that means she needs money, so an offer by PETA (People for the Ethical Treatment of Animals) to use her in a new advertising campaign may be just the thing to save the day.

Man, that is just cold. Sure she has fourteen kids, and the last set does fit the dictionary definition of a litter, but man, that's cold.

Quoting the OC Weekly, the irreverent leftist rag with the name that sounds like it was made up for use in television and/or film:


I am writing on behalf of People for the Ethical Treatment of Animals and our more than 2 million members and supporters, including thousands across Southern California. In light of recent reports that you may be facing foreclosure on your home, we'd like to offer to bolster your finances by paying to place an ad (enclosed) on your front lawn. The ad would read, "Don't let your dog or cat become an 'octomom.' Always spay or neuter. PETA."

When you gave birth to octuplets to bring your total number of children to 14, you grabbed headlines and got the world talking about your controversial decision. Now will you help turn some of that attention to another important matter--the dog and cat overpopulation crisis? Every year, 6 to 8 million animals are turned over to animal shelters, and roughly half of them are euthanized because of the lack of good homes. Thousands of other unwanted dogs and cats live on the streets, where they often fall victim to cars, abuse from unkind people, attacks by other animals, disease, or starvation. Much of this suffering can be prevented by simply spaying and neutering.

Unlike humans, dogs and cats cannot decide for themselves how many offspring they will have. Spaying or neutering just one animal can, in the long term, prevent the births of thousands of animals in a world that has far too few good homes to go around.

Taking us up on our offer is a win-win situation: It would help you and your children to keep your home and also reduce the number of homeless dogs and cats. Thank you for your consideration.

Man, really cold. The letter is signed by a Michelle Cho, manager of special projects, who appears to share a common proclivity of Korean speakers of English for frank-but-socially awkward direct speech, the kind that is familiar to anyone who has lived in Korea and heard their cousins, girlfriend, boyfriend, co-workers, total strangers on the bus say things like "you're overweight," "you've got a pimple today," "your nose is big," or "the unusually high number of children that came out of your body makes you a freak show."

UPDATE (3/27/2010):
Ms Suleman has accepted the offer, which includes five thousand dollars and all the veggie hot dogs she and her fourteen kids can eat in one month. My guess is that the newborn octuplets shouldn't be eating any, but I'm a good parent. 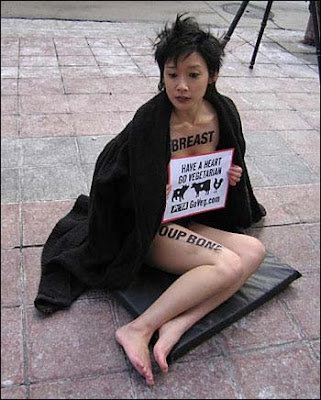