The sinking of the Chonan and the aftermath, one of the worst military disasters in South Korean history,  has inevitably caught the attention of global media, who are not content to just run an AP, Reuters, or AFP article on the topic.

And we can expect them to keep paying attention for a few days while Seoul sorts this whole mess out. There is a very big story buried inside this tragedy: Was this an attack by the North or was this error on the South's part, and if it's the former, why is Seoul being so coy about it? Well, the answer could be that they're being careful, but for many impatient people, it seems there are two choices: Is this a government cover-up (about the North's aggression) or a government fu¢k-up (about the South's mistakes)?

At any rate, Choe Sanghun at the New York Times had his piece today, which is a good overview of what we know so far:

No new survivors, nor any bodies, have been found since 58 of the ship’s 104 sailors were plucked alive on Friday evening. Relatives of the missing sailed overnight aboard a military ship, arriving at the scene of the sinking on Sunday.

“I heard a terrible explosion and the ship keeled suddenly to the right. We lost power and telecommunications,” Choi Won-il, captain of the Cheonan, told the relatives. “I was trapped in the cabin for five minutes before my colleagues broke the window in and let me out. When I got out, the stern had already broken away and disappeared underwater.”

Most of those missing were believed to have been trapped inside their rapidly sinking ship as waters gushed into their dark under deck, officials said.

“Many sailors were hanging onto the bow of the sinking ship,” Kim Jin-ho, a crewman on a civilian ferry to Baengnyeong, a South Korean border island, told YTN television, describing the rescue scene on Friday night. “They were shouting for help. They were falling into water.”

The sinking of the ship near the disputed sea border, where the navies of the two Koreas have fought bloody skirmishes, raised the possibility of a North Korean torpedo attack or sabotage. The South Korean defense minister, Kim Tae-young, told Parliament that the authorities would investigate such a possibility but emphasized that it was too early to connect the sinking to North Korea.

It should be noted that not all the waters in the Yellow Sea are disputed. The North does not recognize the Northern Limit Line (NLL), instead granting South Korea the waters around the islands it controls and a corridor to reach them. The corridors are not shown in the map below, but they are shown in the low-resolution black-and-white map found at the link in this paragraph. 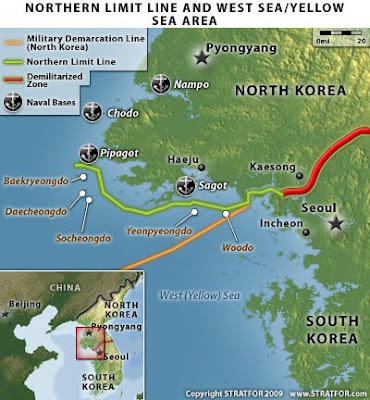 By contrast, the South insists, exemplified by the NLL, that it controls the waters according to an equidistant formula calculated from the land each side controls, with the string of inhabited South Korea-held islands stretching out to the west just south of the North Korean mainland (all in the metropolitan boundaries of Inchon, by the way) generating a lot of ROK waters not far from the DPRK mainland.

Given that this was on the southwestern side of Paengnyŏngdo Island (i.e., away from the North Korean mainland), but not too far offshore, I think this was in an area both sides recognize as South Korean waters. I need to check out the coordinates.