Never underestimate the power of whiny Koreans to get you to do things that you might not want to do. Katherine Heigl, made famous by "Grey's Anatomy," a hospital drama named for the medical books that were compiled about the same time the show first went on the air, and made famouser by Knocked Up, in which she showed a bajayjay comin' out her vajayjay, is leaving GA for good and with little fanfare.

And the reason is her screaming, pooping, spitting-up ball of joy:


"I am done. We just finalized our agreement. Everyone had been working really hard to find an amicable and gracious way of letting go and moving on. It’s sad but it’s what I wanted.”

Heigl, who has been on maternity leave, explained that adopting a daughter has changed her priorities and she no longer wants to work full time. She was scheduled to appear in the season's last five episodes. But ABC Studios allowed her to leave without fulfilling that part of her contract.

That means the Jan. 21 episode was Izzie Stevens' last hurrah.

“I know I’m disappointing the fans,” she said to EW. “I just had to make a choice. I hope I made the right one.”

Well good on her for not just having a nanny raise her baby while she's on the set. And just to remind readers, Katherine Heigl's child is an adoptee from South Korea (see here, here, and here), just like her sister. 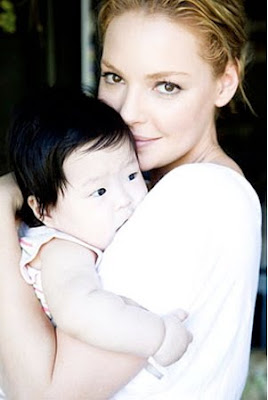