No more dagger pointed at Japan's whatever

Over at The Marmot's Hole, Robert Neff has put up a post showing clever maps made by folks in Korea and in Japan with too much free time on their hands. The one of Korea as a tiger that shows the decidedly non-Izanagi origins of Japan is quite cute, and the one below is quite interesting. 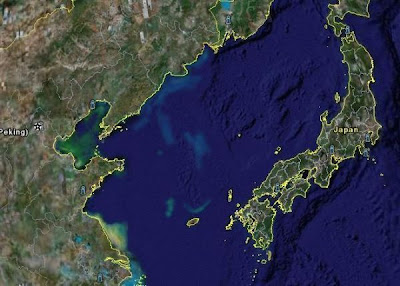 This, Mr Neff says, is "how the Japanese radicals would like to see the regional map changed." He notes that Tokto has not been blotted out — indicating that it is part of Japan. But then again, Chejudo remains, too. Wishful thinking from former imperialists?

Anyway, this map illustrates something I always thought was a good counterpoint to those who insist the Sea of Japan should keep that name because without Japan, it would just be the Pacific Ocean: Similarly, without Korea, it would just be a much bigger Yellow Sea.