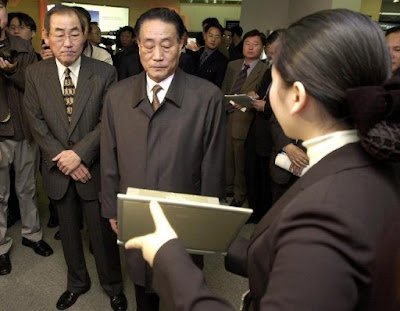 Yonhap (via Reuters via WaPo) is reporting that North Korea has executed the DPRK official determined to be responsible (I wrote about him here) for the economic downturn and social upheaval that occurred in the wake of the "currency revaluation," also known as the Great Currency Obliteration of 2009:


North Korea has executed a ruling party official blamed for a botched currency reform, in a desperate attempt to quell public unrest and stem negative impact on Pyongyang's power succession, a news report said on Thursday.

The execution by firing squad in Pyongyang last week of Pak Nam-ki [above, center], Labour Party chief for planned economy, was for the crime of "a son of a bourgeois conspiring to infiltrate the ranks of revolutionaries to destroy the national economy," South Korea's Yonhap news agency said, quoting sources.

But both North Korean officials and even many in the communist country's public do not believe the explanation that Pak was a conspiring anti-revolutionary, Yonhap quoted sources knowledgeable about the issue as saying.

"A son of a bourgeois conspiring to infiltrate the ranks of revolutionaries"? Geez, Orwellian much? Seriously, I thought that kind of rhetoric went out with Chairman Mao and Uncle Joe.

Someone had to take the fall, and it couldn't be Kim Jong-il's son, Kim Jong-un, who would have gotten all the credit had the reform somehow been a rousing success. Indeed, as Yonhap points out, the Dear Leader himself may be angry because this put a crimp in his plans for his son to succeed him:


"All the blame has been poured on Pak after the currency reform failure exacerbated public sentiment and had a bad effect" on leader Kim Jong-il's plan to hand power over to his third son Kim Jong-un, one source told Yonhap on condition of anonymity.

Indeed, if KJI has only three years left, that doesn't leave him much time. But I'm getting more and more of a feeling that even with pancreatic cancer, diabetes, hardening of the arteries, and a large cavity where his soul would be, Kim Jong-il may just outlive the DPRK regime. But maybe just barely.

Now another good question to ask would be, why Pak? Was he really the guy who said, "Hey, let's make everybody turn in their money but only let them change just a few months' worth... what are the people going to do about it?!" Or was he someone who, they thought, is already seventy-seven years old, he's had a good life, so take one for the team? Or maybe he's someone who might have been working behind the scenes, before he goes out, to pull down the regime? I am curious.

UPDATE:
The story is also being carried by AP, AFP, Yonhap, Joongang Daily and the Korea Times. 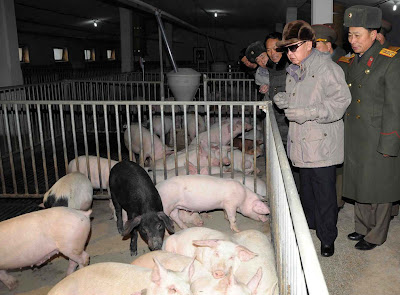 [above: A look of panic crosses the Dear Leader's face when he suddenly realizes what Animal Farm was all about.]
on March 18, 2010