So where were the protests against the Chile-Korea FTA?

One of the questions asked of me regarding my piece on the power of the clandestinely pro-Pyongyang chinboistas (where I make the case that these anti-government, anti-corporate, anti-US, anti-Japan, and decidedly pro-North fifth columnists are looking for whatever issue or combination of issues they can put together to resonate with their own useful idiots and the wider public so that they can — à la 1960 and 1987 — bring down the regime) is this: So where were the protests against the Chile-Korea FTA?

There are several reasons why, say, opposition to the Korea-US free-trade agreement (and related issues like President Lee ending the ban on US beef) would be pushed by the chinboistas: It has the anti-US angle (big, bad USA is trying to control the Korean economy), the anti-corporate angle (chaebol would benefit at the expense of farmers), and especially the anti-government angle (the president is kowtowing to his American controllers). 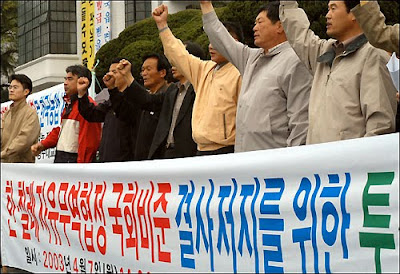 By contrast, the sentiment against the Korea-Chile FTA appealed mostly to the anti-corporate and anti-government sentiments of the chinboistas. Nevertheless, it was there and there were considerable protests, particularly since this bread-and-butter issue for the farmers meant it resonated quite well with them. The FTA passed in the early part of the last decade, before the heyday of the anglophone K-blogs, so there was considerably lower awareness or information about them.

But they were there, and there are some sources in English. In fact, the chinboistas themselves write about such things in English:


The participants strongly condemned the attempts of the Korean government to legislate policies that will allow foreign investment in schools and health care centers within the FEZ -in fact, implementation of WTO's 'autonomous liberalisation' -, the attempts to cut down the screen quota system (protection for Korean film industry! ) through the Korea-US Bilateral Investment Treaty, liberalisation of the agricultural sector through the commitment to the WTO and Korea-Chile FTA, and neoliberal labour policies that are driving many workers to take their own lives. Through a declaration, the participants vowed to continue to expand solidarity and strengthen joint struggle against the Korean government and transnational capital. 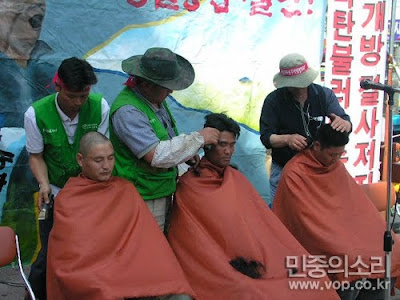 Even though Chile has a completely different climate and growing season than South Korea, its exports were seen as a real threat to farmers, particularly those who extended their season with green-house agriculture. The chinboistas were able to milk that fear, and they meant business:


Protestors retaliated with molotov cocktails, which appeared for the first time in the city center in three years. 113 people were arrested, several were injured, and one worker lies in a coma. Another rally is scheduled for 12th November, when the KCTU is staging a general strike.

In the midst of it all, the government and the National Assembly announced that they will put the Korea-Chile FTA on the agenda of Assembly's standing committee on 10th November.

Indeed, it was depicted as a government betraying its people. It goes further:


The Korea-Chile FTA is expected to be devastating for peasants, as imports from transnational agribusinesses flood the market. The Korean Farmers' Solidarity, a coalition of Korean Farmers League and other agricultural organisations, staged a protest in front of the National Assembly today, vowing 'revenge' at the general elections next year to the parliamentarians who vote in favour of the FTA. Some peasant members chained themselves to lampposts inside the National Assembly, while others fought demonstrated outside. Again, many farmers were injured and arrested during the confrontation with riot police. The Korean Farmers Solidarity is planning to mobilise 100,000 peasants and farmers on 19th November at the National Farmers Rally, in protest against the WTO and the FTA. Strategies are being formulated to broaden solidarity between the different sectors and organisations struggling against liberalisation.

Notice the communistic rhetoric (e.g., referring to the farmers and villagers as "peasants"), though this stands in sharp contrast with one of the decidedly non-communist methods at their disposal: "revenge" at the ballot box. Ah, if only the victims of the chinboistas' handlers up north were so lucky as to have that in their tool box. 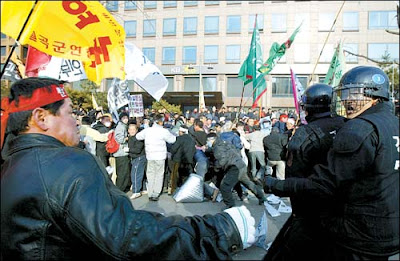