Death of diver at site of Chonan sinking

The aftermath of the sinking of the Chonan has brought more questions than answers. With government speculation first practically ruling out North Korean involvement and now swinging back toward that apparent likelihood, a lot of people watching this story wonder if the ROK military has known all along — basically North Korean wrongdoing or South Korean error — what's going on but has deliberately been slow to inform the public so the government can figure out what to do.

Fueling that speculation that officials have been snowing both the masses and mass media have been statements (e.g., that what Chonan had been shooting at for fifteen minutes may have been just a flock of birds) that seem counter to reality.

One such official statement was that the waters were quite treacherous and that has significantly hampered operations to find the wreckage, search for survivors, and determine the cause of the explosion that sank the ship. 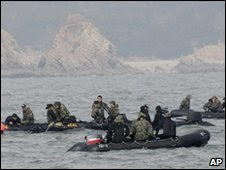 Skeptics cited pictures of calm seas with lots of boats sitting on top of the water, which itself was only a few dozen meters deep. Some pointed out that the government's take may well be true: the current that flows beneath the surface can be very swift there and the near-freezing water in the narrow and shallow straits can be very murky.

Sadly, evidence of the veracity of the military's and government's claims came in the most tragic of forms: One of the rescue divers involved with searching for the dozens of missing sailors has himself been killed. From BBC:


Officials say they believe that some of the 46 sailors still missing could have survived in water-tight cabins in the stern of the ship.

More than a dozen South Korean ships are involved in the rescue effort, plus a US vessel.

The diver who died was one of dozens brought in to try to gain access to the wreckage. The cause of death is not known.

Another diver was also been taken to hospital, military officials said.

A navy spokesman said the divers were working in "a very vicious environment" with swift currents and murky visibility.

"Our goal is to get into the ship and find any survivors but at the moment it is extremely hard to do so," the navy spokesman said.

On Monday, teams used a hose to inject oxygen into the stern via a crack, but divers who knocked on the hull received no response.

The story is also carried by Yonhap, CNN, the Christian Science Monitor, the Korea Times, and the Korea Herald.

This is tragedy compounded by tragedy. Let's hope and pray that no further casualties occur.