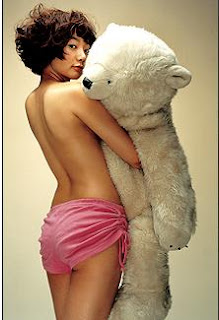 Bae Doona [배두나], whose name should properly be Pae Tuna — has bravely bared all for a Japanese movie, in order to show what professionals Korean actresses are. Make of that what you will. She's actually been nude before, in at least Sympathy for Mr Vengeance. A dark movie, but worth a watch anyway.

Imagine if it had happened the other way
Meanwhile, over in Bulgaria, the short-track championships are going on — didn't we just have the Winter Olympics? Anyway, for the 3000-meter race, they're supposed to go twenty-seven laps, but the judges screwed the pooch (not to be taken literally) and had them race only twenty-six. Right toward the end, Lee Hosuk (he of tripping up his teammate fame) rushed ahead of J.R. Celski, as did Kwak Yoon-gy (don't ask, don't tell).

So in the end, you had a race that was about 4% too short with two South Koreans coming in first and second. None of this was realized until after the medals were awarded and people watched it on video (yes, people do that... it's some sort of punishment, I think). The final decision was to let the medalists keep their medals, but their times don't get recorded.

All I can say is imagine the uproar if the South Koreans had not come in first. I'm fairly sure there would be demands for a re-race, and if a certain Mr Hewish had been the errant judge, I don't even want to imagine the Netizen threats.

In conclusion, I'm beginning to see the value of having Apolo Anton Ohno flapping his arms at the matches. Apparently that's the only way to get the judges to pay attention to what they're supposed to.

Email ThisBlogThis!Share to TwitterShare to FacebookShare to Pinterest
Labels: shorts