Gomes is a friend of Bob (as in Robert Park) 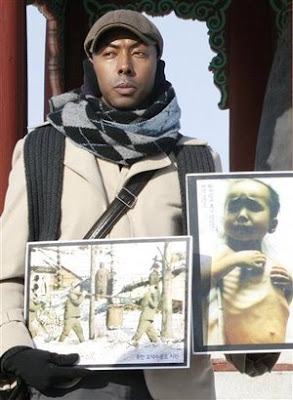 When we first got news last January about Aijalon Mahli Gomes crossing into North Korea, this is what I wrote:


I just hope this isn't one of Robert Park's fellow travelers thinking they can change the regime with their arms stretched out in love. All they're doing is making things worse for people who might need the paths they're using as escape routes.

Well, it turns out I was right. From AFP:


Gomes, an English teacher in South Korea, apparently crossed the border from China on January 25, one month after missionary Robert Park did the same.

"I believe he may have gone to North Korea after being inspired by Park," Jo told AFP.
Jo said Gomes attended rallies in the South on December 30 and January 12 calling for freedom for North Koreans.

"I have a picture showing him praying and weeping at that time. I remember he was a quiet but devout Christian who was very interested in the rights of North Koreans."

Jo said that while Gomes had not mentioned any plans to go to the North, "I believe his firm faith as a Christian prompted him to make a dangerous journey to North Korea as Park did."

Please, people, while your willingness to risk your life to help others may seem admirable, it loses its value and even becomes detrimental if you are putting others at risk and/or helping the very regime in Pyongyang you hate so much. What political or financial capital was required to release Robert Park? Who suffered by him traipsing into the North? And what similar outcome can we expect from Gomes's odyssey?

It's time for Pax Koreana to disavow such behavior.

UPDATE:
Joshua at One Free Korea has more on Mr Gomes and his apparent motivations.