Well, why don't you go use it already?!

From The Daily Telegraph we get word that the Dear Leader has been maintaining a slush fund — enough to buy three billion slushes, if someone were inclined to something so foolish — that he could use if he ever goes into exile:


Kim Jong-il, the Supreme Leader of North Korea, has a $4 billion (£2.6 billion) “emergency fund” hidden in secret accounts in European banks that he will use to continue his lavish way of life if he is forced to flee the country.

South Korean intelligence officials told The Daily Telegraph that much of the money was held in Swiss banks until authorities there began to tighten regulations on money laundering.

Mr Kim’s operatives then withdrew the money - in cash, in order not to leave a paper trail - and transferred it to banks in Luxembourg.

The money is the profits from impoverished North Korea selling its nuclear and missile technology, dealing in narcotics, insurance fraud, the use of forced labour in its vast gulag system, and the counterfeiting of foreign currency.

“I believe this is the most extensive money-laundering operation in the history of organised crime, yet the final destination of the funds has not been given the proper attention it deserves,” said Ken Kato, the director of Human Rights in Asia.

“Somewhere in the world, there are bankers who are earning a large sum of money by concealing and managing Kim Jong-il’s secret funds, and at the same time, almost nine million people in North Korea are suffering from food shortages,” he said. “I believe the secret bank accounts are now in Luxembourg, or have recently been transferred from Luxembourg to other tax havens.”

A spokesman for the Luxembourg government said that it was obliged to investigate all transactions involving Stalinist North Korea.

“The problem is that they do not have 'North Korea’ written all over them,” he added. “They try to hide and they try to erase as many links as possible.”

I say we let him have his slush fund. In fact, I say we promise the guy that we'll also leave him and an entourage of his closest one hundred buddies or loved ones completely alone as long as they vacate Pyongyang, and the rest of North Korea, nice and quietly. Let's lease out a square-mile swath of Mongolia and build Dear Leader Land and let him live there and use his money to gain anything he wants. As long as he promises to leave.

Seriously, if the guy is cornered, he goes out guns ablazin'. If he thinks he has access to his money and he can live without punishment, he may just decide to call it quits when the angry mobs are at the city gates.

Sure, that doesn't satisfy revenge fantasies, but if it gets him out with little or no bloodshed, I'd say it's worth the tradeoff. 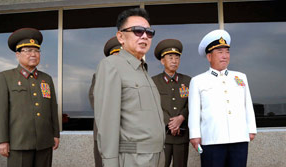 [above: Kim Jong-il and his entourage check out the "gay Love Boat" as it docks in Hamhŭng.]