A thousand points of fright

Reuters (via the Grey Lady) is reporting that North Korea has expanded its missile capacity by twenty-five percent over the past two years, from 800 in 2008 to 1000 in 2010:


Pyongyang's arsenal includes intermediate-range missiles that can hit targets at up to 3,000 km (1,860 miles) away, Yonhap news agency quoted Kim Tae-young as telling a forum of business leaders.

The missiles could hit all of Japan and put U.S. military bases in Guam at risk.

South Korea's last estimate of the North's missile stockpile was 800 done in 2008, Yonhap said. Its Defence White Paper in 2008 said the North had deployed the intermediate range missile.

The estimate comes at a time when the North is seen to be under increasing pressure to return to six-party talks on nuclear disarmament, following economic sanctions imposed on it after its nuclear test in May 2009.

It always strikes me as peculiar the way the North Korean military threat is written up. Screw South Korea, the media seems to be suggesting... these things could hit Hawaii! And uninhabited Alaskan islands! And Guam! Which is part of the US! Even here, they seem to be assuming the average reader doesn't realize Guam is American (and why would they?), so they emphasize the missiles could hit US bases in Guam.

But that's not too terribly likely. If the DPRK strikes American anything, it's game over. The US would come down so hard, the Norks would wake up in last Tuesday. No, what the DPRK would want to do is hit South Korea so hard so fast that the US wouldn't have time to react and — they hope — wouldn't have the stomach to get involved. Or, alternatively, strike South Korea quickly and then threaten to hit Japan if the US enters the conflict. Either/or.

Living in Seoul, we're always under the threat of a North Korean military attack, including artillery, so this news is scarier, but it's not new. Folks in Japan might feel a bit more on edge, because the prospect of really pounding Japan is now 200 missiles stronger.

And of course, there's always the possibility that Pyongyang might end up selling these missiles to a rogue state or two for some hard currency during these hard times.

No matter what, this is not a good thing. 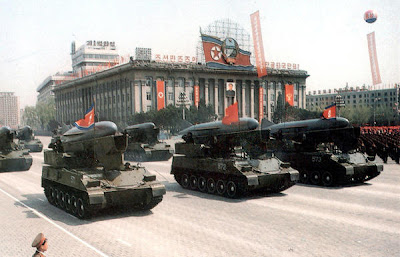