At least, that's what I gather from this puff piece on the latest "Look! The all-powerful American media is paying attention to Korea!" news story (underlined emphasis mine):

Perez Hilton, operator of her blog, Perezhiltontv.com, which reports news on pop songs, movies and other U.S. entertainment last Friday put single music videos of Bing Bang and 2NE1 on her blog.

He had another reason to show her love for the music video. T.O.P., one of the four-member group, held the idol of Hilton for one minutes and 17 second, as if he was conscious of Hilton. Hilton praised the scene "very creative."

On the same day, the blog also introduced "Try to Follow Me," single video of 2NE1, saying that the singers seem to feel U.S. singer Lady Ga Ga.

Peres Hilton has introduced a variety of music videos, such as those from Uhm Jung-hwa and Wonder Girls

I guess news story should have been in quotes, too.

First off, Perez Hilton [below] is a he, not a her. Yes, the "don't ask, don't tell" camouflage of homosexuality in South Korea makes things a bit fuzzy for the hoi polloi, but Mr Hilton being gay does not make him a woman. Neither does wearing pink.

Of course, it's forgivable that the KT author might get Perez/s Hilton confused with Paris Hilton, since Mr Mario Armando Lavandeira, Jr. (Perez's Christian name) deliberately chose a moniker based on that of hotel-heiress-slash-actress-slash-model-slash-singer-slash-convicted-felon-slash-inadvertent-porn-star.

But really, KT writer, can't you be troubled to do your homework just a wee little bit? I mean, checking who someone is and what they're famous for is one of the few legitimate uses of Wikipedia, so have a go at it next time. Maybe the manger of the Kang Shin-who School of Journalism Excellence should refund your tuition. 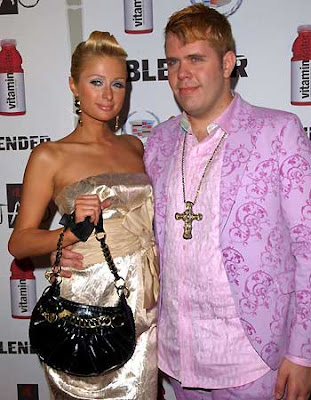 [above: One is a butt-ugly egomaniacal slut and a total media whore, and the other is Paris Hilton. Wait, no. I've got the joke backwards.]

Oh, and I guess I should add a long diatribe about how the Korean media needs to put an end to the sycophancy and adulation of the American media where any utterance about Korea by someone in the US is treated as "news."

I mean, geez, you've got tens of millions of Americans who don't even like to read subtitles because it makes their head hurt, for whom even deciphering British accents in film is above most people's pay grade, so they're not going to care about anything foreign unless it's to mock and ridicule. But on the other hand, there are hundreds of millions of adoring hallyu fans in Japan, China, and Southeast Asia — and increasingly beyond — so just bask in that light and enjoy it.

But we're out of time, so the five-scroll-downs diatribe will have to wait. Tune in next week, kiddies!

UPDATE:
Brian informs us that Perez Hilton has a whole category devoted to K-pop. Maybe with the Romanization mix-up, he thought it was gay-pop.