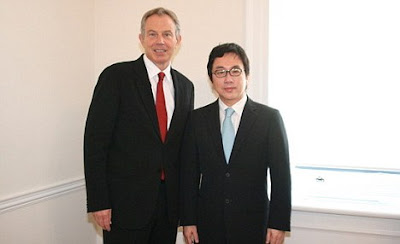 The Daily Mail is echoing a news story in the Joongang Ilbo that former UK Prime Minister Tony Blair is facing embarrassment over his "secret dealings with a South Korean oil firm" after reports the company's CEO, Choi Kyusun [최규선], served two years in prison for corruption, after being convicted of making illegal payments to influence the awarding of contracts to run a national lottery, and then allegedly got involved in for financial impropriety by supposedly buying his company a place in an oil exploration consortium doing business in Iraq's Kurdistan. Are you getting all that?

This is Korea, where corrupt business dealings are the way we say hello, so it's not that big a deal on this end, but on the other side of the ocean (and then over a continent and then across another ocean), this is putting omuraisu on the XPM's face. From the Korea Herald (because I couldn't find the English-language source in the Joongang):

It had been kept secret for nearly 20 months before it was revealed last week.

Blair, who has been accused of cashing in on his former premiership through a number of consultancy deals, was found to have offered consulting in August 2008 to a consortium of investors led by UI Energy Corporation.

Details on the type of consulting and how much he received for the role have yet to be disclosed.

The Korean firm is headed by Choi Kyu-sun, who was convicted in 2003 in a high-profile corruption scandal involving potential bidders wanting to run a national sports lottery and a son of then-President Kim Dae-jung.

According to news reports, Blair repeatedly told the committee that the existence of the deal had to be kept secret at the request of the Korean firm, because of "market sensitivities."

If by sensitivities you mean prison, and by market you mean going to, then spot on! Really, I'd like to think that the former leader of such a powerful nation would have better intelligence about those with whom he does business. But this is the guy who was convinced his buddy Bush had a slam dunk on those WMDs, so maybe I have a better chance of hoping for lollipops coming out my s.o.'s arse when she farts.