LAT on movement against dog meat consumption in Korea

This is yet another example of why it is dumb (not to mention intellectually lazy) to paint all people in some group with the same brush. While there are loads of Koreans who eat dog meat, usually consumed in some sort of soup and especially enjoyed during hot summer months, and there are those who stand by the cruelty with which the canine cuisine is dispatched, they do not represent all Koreans, many of whom eschew dog meat and even protest the very things that get non-Koreans so riled up about this. 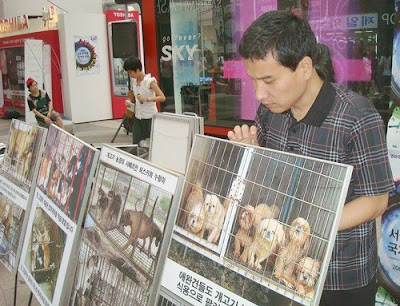 With regularity you could set a calendar by, John Glionna of the Los Angeles Times and local reporter Jumin Park have come up with the dog meat story, this one focusing on the protests.

As Lee Won-bok arranged his posters one Saturday at a busy outdoor pedestrian mall, passersby peeked over his shoulder in dismay and horror.

Some covered their eyes. But hundreds also clamored to sign Lee's petition to outlaw a traditional culinary practice here: the eating of dog meat.

Each weekend, the 45-year-old animal rights activist stages a graphic photo display of dogs kept in cages, hanged and butchered, their meat prepared for market. He knows the images are hard to look at. But that's precisely his point, to show the harsh treatment of an animal that many South Koreans now view as companions, not cuisine.

For years, foreign advocates have railed against the practice of butchering dogs and cats. Although Koreans have eaten dogs for centuries, the habit became more prevalent during the privations that followed the Korean War. It eventually spread from the poor and elderly to be adopted by the more affluent as niche cuisine.

Most protests were dismissed as the unwanted opinions of outsiders. But as the country has acquired more trappings of Western culture, the number of pet owners has exploded, and South Koreans are taking the lead in promoting animal rights here.

In recent years, at least nine domestic groups against eating dog have been founded to stage street and online campaigns nationwide.

I think I've made my own thoughts quite clear in the past: I do not support animal cruelty in the consumption of dog meat, consistent with my views on other forms of meat and animal product consumption. But at the same time, those who are opposed to dog meat consumption simply because it is dog meat — man's best friend — are apply a cultural conceit that is quite self-centered, particularly if they eat other forms of meat.
But yeah, I would definitely like to see the cruelty of animals stuck in cramped cages (which I know still happens) and being beaten (to the extent that still happens) ended now.
UPDATE:
While mentioning this post you're now reading, The Mizar Marmot's Hole regular commenter Jing also linked to a National Geographic piece which suggests that the Chinese were the first to domesticate dogs 16,300 years ago... for food! Quoting Jing:


Dogs were first domesticated in China from wolves. This was pretty much scientifically acknowledged. Now they’ve isolated the origin to a particular region south of the Yangtze river where the genetic diversity of canines is largest and dated it to maybe 16000 years ago. The kicker is, drumroll please, the mesolithic Chinese may not have domesticated dogs to be used as companions but probably something much more eminently practical, they were to be eaten! It makes much more sense than the idea of dogs being domesticated so junior could have puppies to play with. The early wolf-dogs would have probably been skinned so that their pelts could be used for clothing and the meat consumed. Waste not want not after all. I suppose this is an amusing rejoinder for anyone who would insist that eating dog is barbaric or uncivilized. To the contrary, the creation of the dog and it’s subsequent journey to the pot demonstrates the essence of civilization via man’s dominance of the natural world.

Nothing says "civilized" like copying the behavior of someone who lived sixteen thousand years ago!
on September 06, 2009