Distinguished Sonora High School in the northwestern OC community of La Habra was locked down when a student was stabbed at the beginning of the school day today.

Sonora High School was put on lockdown for two hours after a student was stabbed around 7:40 a.m. today, police said.

The 17-year-old victim was stabbed outside of a classroom by a 17- to 19-year-old male who has not yet been identified, police said.

The student was reportedly taken to UCI Medical Center in Orange. Police said that his injuries were not considered life-threatening.

As usual, the commentariat is a good read for piecing together the rest of the story. In particular, La Habraites (La Habrans?) don't like the tainted image this type of thing brings:

La Habra undoubtedly has its seedy parts just like every other city in America. I've lived in L.H. for 24 years, went to H.S. at Sonora, and work in La Habra. The people who say La Habra is the "hood" are probaby from some rich south county city who have been fed with a golden spoon their whole lives. Sonora is a California Distinguished School,a few times actually. On it's faculty is a former California State Teacher of the Year and the city as a whole is a positive place. Don't judge an entire city just because we aren't located by the beach or because a stupid kid makes headlines for trying to be a thug...crime doesn't happen anywhere else in the O.C.?

What's almost as appalling as this crime is that OCers themselves have not started calling the place "the O.C."
Growing up, I always thought "La Habra" meant "the harbor," which made no sense at all because La Habra was about as inland as you could get in OC. 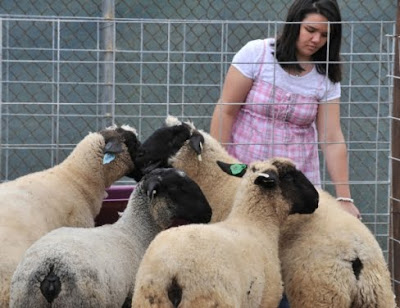 [above: Sonora High School actually has a campus farm. That has nothing to do with this story, unless I can work a pot-grown-in-plain-sight angle to it. Infamous "Octomom" Nadya Suleman also lives in La Habra.]
on September 09, 2009