If we can get the right scientific minds on board, we will someday develop the technology to allow the white-hot anger of Chinese netizens to power the screens and CPUs on which they type out their latest rage-ridden screeds. Imagine, just stick an electricity-conducting cable into one of their nether orifices and — voilà! — green energy and a carbon-neutral footprint while they wile away the masses. Of course, for this innovation to work, they'd have to pull out whatever they've got up their asses about Korea.
But to be fair, sometimes the ire is earned. If the story we find at Korea Beat is true, then perhaps they should be ticked off, at least at Hyundai, or at least at the unnamed Hyundai dealership in the picture whose location nobody can identify. 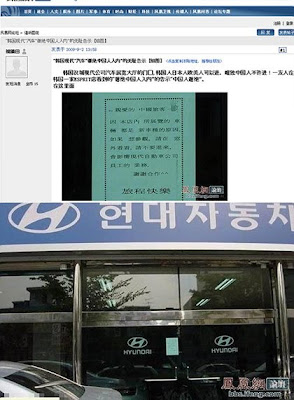 Okay, here's the story, courtesy of the good folks at KB (about whom I'm sure every other person in the K-blogosphere will join me in saying, "Keep up the translating efforts, you two, because you're saving me a huge headache! I hope you guys never get girlfriends."):

A Chinese netizen uploaded this picture, claiming it shows a Hyundai dealership in Seoul which refuses to allow Chinese people to enter. The Chosun Ilbo has the photo and a Korean translation of what the netizen wrote. Hyundai denies that such a policy has ever been followed by any dealer in China or Korea.

Shocking story, if it's true. But is it? Korea has its share of bigots, and plenty of foreign residents in Korea have been told when they called, say, a cellular phone service provider, "sorry, no foreigners," so it's plausible.
But is it likely? Well, with fifty million people in Korea and thirty-five million Hyundai dealerships, the odds suggest that there could be at least one stupid idiot who ran a dealership who for some reason or other didn't want Chinese in his car store.
But we've been burned a few times in the past by Chinese netizens making up stuff to fuel the latest outrage against Korea, and some have been suggesting the sign is fake, or it was planted there by someone trying to engineer some good, old-fashioned Korea-bashing. Maybe some of the Netizens are angry because South Koreans keep claiming Hyundai, Samsung, and LG are from Korea (Koreans claim everything!), and this is their revenge.
Thinking there was a possibility that maybe an anodyne sign or its innocuous intent was being misinterpreted or trumped up by Chinese netizens itching for a fight, I asked "C" in Taiwan to translate it for me. She obliged, because, like a good minion, she is always there to do my bidding:

Dear Chinese tourists,
The displayed cars are all brand new. If you would like to take a look, please stand outside. Your entrance to our office will disturb our employees.

I myself don't speak Chinese, so I'm not sure where the ^^ smiley emoticon fits into that sentence. Maybe after "disturb."
Without knowing the context — including where it is and what kind of “dealership” it is — it looks bad. I wrote at KB that it’s conceivable that this dealership has had a serious problem with looky-loos preventing sales or even damaging vehicles and this is their response, but that is no excuse for this kind of response, and it was ill-conceived and comes across as insensitive, even racist, even if that was their innocuous intent.

It’s also just as possible that the boss is so sick of effin’ Chinese and he couldn’t stand it anymore, so the racist fu¢k put up this sign.
I mean, come on, even if some Chinese are giving them trouble, that's no reason to bar every individual Chinese.
But then I wondered, what could be this obnoxious behavior? And then I remembered this story from the Los Angeles Times, about Chinese camping out in Ikea.
A bit of background from the article:

When the Swedish furniture giant first opened here in 1999, it hoped locals would embrace its European brand of minimalism. A decade later, Beijingers have done just that. Perhaps too much.

Every weekend, thousands of looky-loos pour into the massive showroom to use the displays. Some hop into bed, slide under the covers and sneak a nap; others bring cameras and pose with the decor. Families while away the afternoon in the store for no other reason than to enjoy the air conditioning. 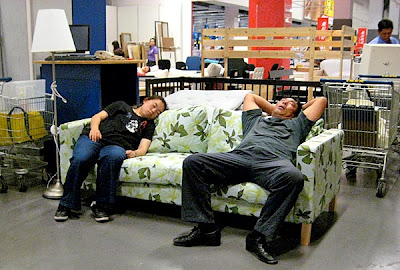 If you don't mind while I take the behavior of the people this ethnic group over there and apply it to some other co-ethnics over here, I think I may have figured out what's going on: Chinese tourists have been taking staycations at Hyundai dealerships.
Can there be any other possibility?
on September 09, 2009