While the Korea Times reports that H1N1-fearing Korean consumers are eshewing E-Mart in favor of e-shopping, the New York Times is reporting that people are changing the way or the frequency with which they shake hands, press the flesh, or otherwise greet each other:

As the world braces for a second wave of the swine flu that broke out in the spring and resulted in the deaths of more than 2,100 people worldwide, the disease is altering long-established patterns of everyday greeting. Handshakes have been cut short, kisses aborted. Warm embraces have been supplanted by curt pats on the back.

The school district in Glen Cove, N.Y., is discouraging students from exchanging high-fives. In Spain, the health minister has urged citizens to forgo the customary peck on both cheeks. Officials from Lebanon to Kuwait have called for Muslims celebrating Ramadan not to hug excessively.

Meanwhile, the NYT also reports that some colleges are getting quite serious about quarantining those infected with so-called swine flu:

... the Turman South dormitory at Emory University in Atlanta is what administrators call a self-isolation facility. Or, as students call it, the Swine Flu Dorm. The Leper Colony. Club Swine.

It is a holding pen for the coughing, wheezing, hand-sanitizing souls whose return to college coincided with their infection by a serious and highly contagious virus. More than 100 strong at Emory, they belong to a growing number of students at colleges across America experiencing a bizarre start to the year: the on-campus quarantine.

The residents of Turman South receive free meals, do not attend class, and travel to the pharmacy in a van they call the Flying Pig. Linens are changed daily. A staff member brings grocery bags of Tamiflu, granola, sports drinks, soup and thermometers. The goal is preventing the infected from sniffling and hacking their way into an epidemic.

Free meals? Sign me up! Meanwhile, courtesy of the NYT, enjoy this handy-dandy list of how risky various forms of contact are. If ever two burly 1950s textbook characters needed a reason not to mouth, cheek, or air kiss, it's gotta be this. 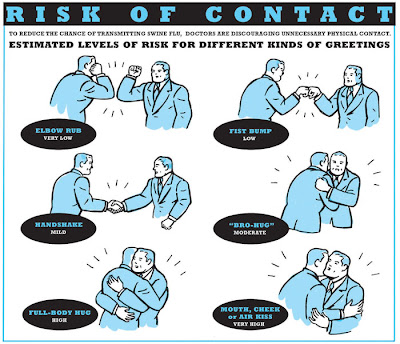