There are easier ways to visit Europe 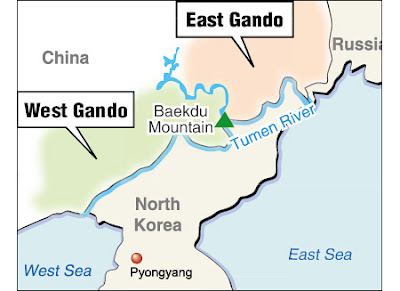 [above: Ignore the atrocious Revised Romanization. "Gando" is pronounced closer to McCune-Reischauer's "Kando" rendition and, since the DPRK still used an M-R variant, it should be Mt Paektusan, not Mt Baekdu. "Pyongyang" is basically correct.]
Brace yourself, kiddies: Ten NGOs are taking to the International Court of Justice (ICJ) their claim that the Kando region (간도/間島; Jiandao/间岛 in simplified Chinese; aka Gando) currently recognized internationally as territory of the People's Republic of China, actually belongs to Korea as it was stripped from the the Korean Empire, then a "protectorate" of Japan, in 1909.
In fact, this movement has been gaining momentum since this month is the 100th anniversary of the Kando Convention signed between Japan and China, the agreement which took Korean territory away and handed it to China. Koreans generally call this and other agreements from the era "null and void," since Korea's leadership was under duress.
China is about as likely to go to the ICJ over this issue as Korea is to go there over Japan's claims to Tokto/Takeshima: zilch. Even if they firmly believe their case is absolutely bullet-proof, there is too much at stake for even the slightest miscalculation.
If this gets any play in the press, expect it to whip up animosity on both sides. It may also put some heat on the millions of ethnic Koreans living in the Yanbian Autonomous Prefecture (in the "disputed" area) or elsewhere in Chinese territory.
on September 08, 2009