This is not a news story 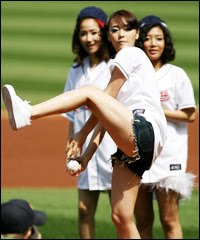 ... but what other excuse is there to print this picture?
This is Sunye of the Wonder Girls throwing out the first pitch at a Cleveland Native Americans game. While the truth is that there is no lascivious sports-related picture the Korean media won't print, the innovation here is that they found an upskirt photo opportunity at a Major League Baseball game! Eat your heart out, prurient Japanese media! 'Cuz that's all you'll be eating out today!
But if there were newsworthy "cover" (i.e., justification) for this photo, it would be that the Wonder Girls are on tour and they happened to be passing through Ohio, and South Korean baseballer Choo Shinsoo is on the Cleveland Indigenous People, who were playing the Minnesota Twins, after which the LG Twins got their name, and Minnesota has a lot of Korean adoptees.
And at some point, a bus with a Tokto advert was passing the stadium on its way to a flag-eating contest. 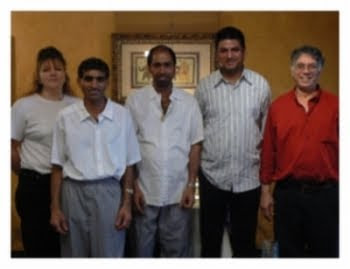