UPDATE:
The Hump has closed and the owner has apologized for "our illegal actions."

I'm just glad they found the one sushi restaurant in L.A. County that's not run by Koreans. (HT to ROK Drop)


Federal authorities have charged a trendy Santa Monica sushi restaurant with serving whale meat -- an investigation that was spurred by the team behind the Oscar-winning documentary, "The Cove."

Prosecutors charged Typhoon Restaurant Inc., the parent company of The Hump, and one of its chefs -- Kiyoshiro Yamamoto, 45 -- with the illegal sale of a marine mammal product for an unauthorized purpose.

While it is considered a delicacy in Japan and some other countries, meat from whale -- an endangered species -- is illegal to consume in the United States.

The misdemeanor charge carries a federal prison sentence of up to a year and a fine of up to $200,000 for the company, said Thom Mrozek, spokesman for the U.S. Attorney's Office.

Lawyers for Typhoon could not be reached for comment. But the restaurant told the Los Angeles Times it accepts responsibility and will pay a fine.

The investigation began in October when two members of the team that made "The Cove" visited The Hump, officials said.

"The Cove," which exposes the annual killing of dolphins at a Japanese fishing village, won the Academy Award for Best Documentary on Sunday.

The restaurant, located at the Santa Monica Airport, is known for its exotic fare. Its Web site asks diners to surrender themselves to its chefs for "a culinary adventure ... unlike any that you have previously experienced."

Armed with a hidden camera, the two women captured the waitress serving them whale and horse meat and identifying them as such, a federal criminal complaint said. A receipt from the restaurant at the end of the meal identified their selection as "whale" and "horse" with the cost -- $85 -- written next to them.

The women snuck pieces of the meat into a napkin and later sent them for examination to a researcher at Oregon State University. He identified the whale sample to be that of sei whale, prosecutors said.

The sei is found throughout the world's oceans.

Whalers began to hunt them after the population of blue and in whales declined due to overfishing. It is now considered an endangered species.

Here are some of my thoughts on whale meat consumption, from a four-year-old post. And while I'm at it, I'll reproduce a picture of whale meat, because the picture of Hump Restaurant (as in humpback whale?) makes the whole thing seem so sanitized. 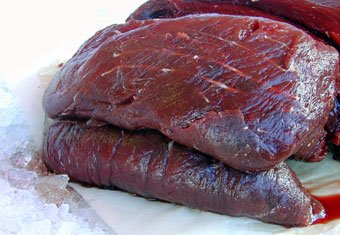 Email ThisBlogThis!Share to TwitterShare to FacebookShare to Pinterest
Labels: California, save the whales, sushi