The message today, kiddies, is that it's a dangerous world out there. 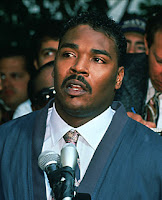