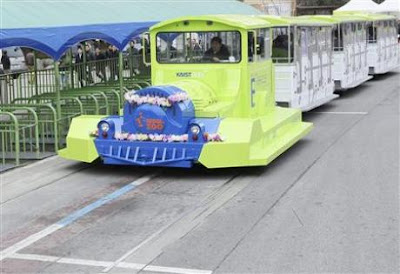 Reuters has an interesting article on some innovations in electricity-powered public transportation using "green technology" that requires no wires:


The country's top technology university on Tuesday unveiled a new electric transport powered by recharging strips embedded in roads that transfer energy through magnetic connections. There are no direct connections with wires.

Vehicles with sensor-driven magnetic devices on their underside suck up energy as they travel over the strips embedded a few centimeters (inches) under the road.

"The technological concept behind the idea has been around for about 100 years. We have found a better way to transfer the electricity to make it practical," said B.K. Park, a project member at the Korea Advanced Institute of Science and Technology.

The university about 140 km (90 miles) south of Seoul has four prototype buses using the technology on its campus and is in talks with Seoul and other cities to have buses running in the next three years using the system called "online electrical vehicle."

The strips, which are attached to small electrical stations, are laid in bus lanes and roads running up to intersections so that vehicles can power up where traffic slows down.

The strips are in segments of several tens of meters (yards) in length and vehicles receive what is termed "microcharges" each time they pass over one.

"These vehicles are not like mobile phones that need to be charged for hours. Microcharges are quite efficient," Park said.

Unlike electric lines used for trams, vehicles do not need to be in constant contact with the strips and a person can touch the lines without receiving a shock.

The system allows electric cars and buses to cut down on battery size and extend ranges.

The non-contact transfer of electricity, also called inductive charging, works by magnets and cables on the underside of the vehicle making a connection with the current in the recharging strip to receive power as they travel over it.

Electrically-powered public transport is nothing new, but buses and street cars that use this are tethered to dangerous electric lines above the roadway. If they can put such a wireless system in place in Korea's major cities, it frees up a the same system for more buses, which would cut pollution as well as reduce reliance on Korea's petroleum needs (which are almost all imported).

And at the end of the day, don't we all want to go to work in a choo-choo?

UPDATE:
The Korea Herald has a related story.