That's the kind of analogy it's starting to shape up to. From KBS Global:


A Korean student studying in Moscow remains in critical condition after being stabbed in an apparent hate crime.

The 29-year-old, identified by his surname Shim, was stabbed in the neck by a masked assailant outside a downtown store around 5 p.m. on Sunday, local time.

Shim, a junior at a state-run film school in the Russian capital, is undergoing surgery but is known to be in a critical state.

Russian police say the attack is similar to a number of other recent racist attacks that have targeted foreigners.

Shim has lived in Moscow for six years.

On February 15th, a 22-year-old Korean beaten by a group of local youths in the city of Barnaul in the Russian Far East died as a result of the injuries he sustained.

Arirang also has the story.

Are Koreans being targeted or is this just random violence? Either way it's bad, of course, and it makes me wonder if South Koreans shouldn't just write off (for the time being) Russia as a study destination. (HT to Brian, from whom I snagged the graphic below) 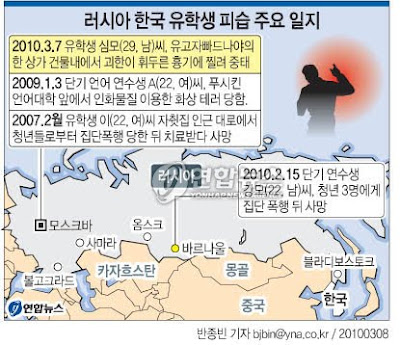