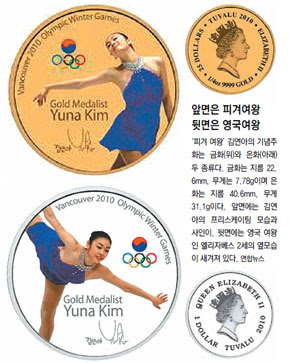 That's a bit weird. From the Donga Ilbo:

The commemorative coins have three unique traits. First, they have been manufactured by the Perth Mint of Australia, not by the Korean mint. The coins are being circulated in Tuvalu in northeast Australia that has a population of only 12,000.

Since the coins are commemorative and not genuine currency, they can't be manufactured by Korea's mint, which does produce money for other countries. Hmm. Korean double standards, yet again. (There is no point to this post.)