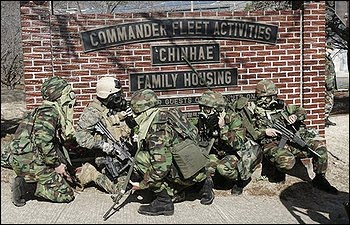 The war games continue, but with an interesting twist: the experts who would be responsible for plucking out North Korea's nukes and other weapons of mass destruction have joined the exercise. Pyongyang will declare that this is a sign Washington and Seoul are preparing an invasion, but what it really means is that someone in the allied capitals doesn't think the DPRK regime will last much longer.