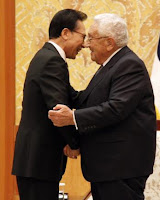 I was all set to post some silly pictures of President Lee Myungbak meeting with influential former Secretary of State Henry Kissinger, but then came news that the nearly 87-year-old Mr Kissinger was hospitalized in Seoul with "minor" stomach problems, though at his age nothing is truly minor.
He's reported to be in Severance Hospital, the same place where I got my appendix taken out. I wonder if he went through the International Clinic.

Anyway, I wish him well and my prayers are with him.

UPDATE:
AP, MSNBC, the New York Times, and Yonhap are also carrying the story. The Bloomberg story, one of the latest available, is fairly detailed.