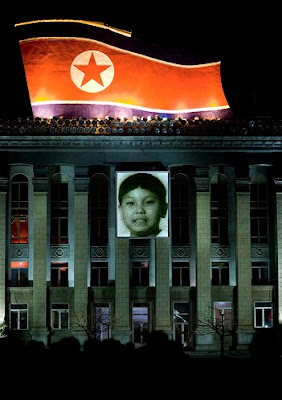 AFP (via Straits Times) is reporting that, according to a Tokyo-based anti-Pyongyang activist group, North Korea is "churning out portraits" of Dear Leader Kim Jong-il's youngest son, Kim Jong-un [김정은; MR: Kim Chŏng-ŭn; RR: Gim Jeong-eun], in a move seen as bringing North Korea closer to its next dynastic succession:


Lee Young Hwa, head of the Tokyo-based Rescue North Korean People Urgent Action Network (Renk), told Yonhap news agency that the North is preparing to distribute Kim Jong Un's portraits as it readies to present him publicly as a successor.

'We've received information that the North has prepared Kim Jong Un's portraits en masse,' Mr Lee told Yonhap. 'The North is apparently in a hurry to declare Kim Jong Un as the successor,' he said.

He said the North might distribute the portraits in time for the birthday of North Korea's deceased founder Kim Il Sung on April 15.

Portraits of Kim Il Sung and current leader Kim Jong Il, which decorate the walls of every classroom, government building, workplace and home, are the most visible signs of the personality cult around the father and the son.

The story is being carried by Bloomberg, which bases their story on a Yonhap report not yet in English.

Unlike when Kim Il-sung died and his son took power, this has so many more chances to backfire. The high degree of disgruntlement that has led to open hostility, the ongoing economic troubles and the concomitant hunger, and a growing realization among the populace that the official take on things is largely made up of falsehoods, are all things that are quite different now compared to the mid-1990s. Not a good time to put the whole country in the hands of someone barely drinking age.

At any rate, it will be nice to see what Kim Jong-un the adult looks like. I do have one suggestion for ReNK, though: your name makes it sounds like you are the bad guys.