Jerry Brown goes for a second round 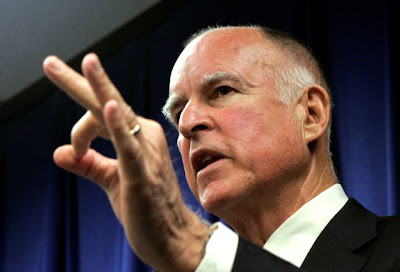 In an update to this story, it's official: Jerry Brown, the current Attorney General and former Governor of the Golden State (1975 to 1983), will run for governor. And he's already going after his well-heeled likely Republican opponent, former E-Bay CEO Meg Whitman:


California needs an elder statesman who can broker deals to lead it out of its current fiscal morass, not an autocratic CEO who is used to giving orders, Democratic gubernatorial candidate Jerry Brown said Wednesday.

A day after launching his campaign, Brown took aim at former eBay chief executive Meg Whitman, the front-runner in the GOP race who is running on her corporate record.

He said CEOs are used to hand-picking their employees, but a governor must confront an independent and sometimes hostile state Legislature and deal with public employee unions and courts that are constantly second-guessing their decisions.

"The political process is about civic engagement, not autocratic executive decision-making in the corporate suite. The two have virtually nothing in common," he said in an interview with The Associated Press at his campaign headquarters in a converted warehouse in Oakland.

My money's on Brown (and so is my vote), a political innovator who has the fiscal credentials to balance the budget, methinks. The guy also has a good sense of Asia's role in California's future (he even lived in Japan a while). I'm also thankful to him for providing me fresher air to breathe when I was growing up.