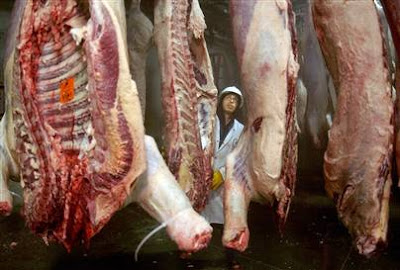 President Obama, in response to trading partners South Korea and Japan banning American beef, called it the "safest in the world" and said it was of the "highest safety standards."

Well, not so fast, says the Produce Safety Project, an initiative of the Pew Charitable Trusts: Every year food-borne illness sickens 76 million people, kills 5000 people (!), and costs the US $152 billion.

From AP, via WaPo:


The financial cost determined in the new report published by the Produce Safety Project, an initiative of the Pew Charitable Trusts, was significantly higher than the $35 billion reported by the Agriculture Department in 1997.

That analysis looked only at some health costs related to a handful of pathogens, said author Robert L. Scharff, an Ohio State University assistant professor of consumer sciences and former Food and Drug Administration economist.

Scharff's study examined government data on all food-borne illnesses and included a broader set of economic losses. They included the costs of emergency and ongoing medical care, pain and suffering and death.

The peer-reviewed report also assigned costs to food-borne illnesses whose source was not identified, which the federal government estimates is more than three-fourths of all cases.

The report did not include costs associated with food recalls or to industries involved, which are also substantial, Scharff said.

"The take away message from the report is that this estimate demonstrates that food-borne illness is a serious burden to our society," said Sandra Eskin, director of Pew Charitable Trusts' food safety campaign. The group is a member of the Make Our Food Safe coalition that includes other public health and consumer safety groups pushing for food safety legislation.

U.S. Rep. Rosa DeLauro, D-Conn., called the costs "shockingly high" and said the U.S. needs to reduce the risk of these preventable illnesses.

Kinda scary, enough to scare you off beef, or at least to write your Congressional representative and get them to, ahem, beef up meat inspections. And while the Mad Cow protests latched onto food safety as a means of ousting President Lee, to some extent, there is some there there.