NYT on figuring out Sejong City 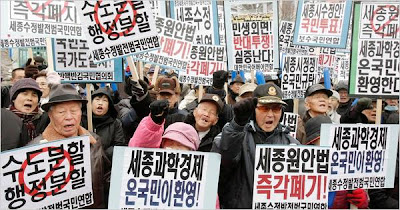 Choe Sanghun in the New York Times has an interesting piece on the Sejong City controversy:

But few South Koreans are happy about this 16.5 trillion won, or $14.3 billion, project, which over the years has morphed from plans to create a totally new national capital, then an administrative center to, most recently, a university and science park.

A provincial governor has resigned in protest. Farmers living near the construction site have held rival rallies for and against. The roads to “Happy City” are festooned with angry black and red banners, some calling the development a scam.

The project has sharpened the rift between the country’s two most powerful politicians: the president, Lee Myung-bak, and the faction leader in his own party who is most likely to succeed him in 2013, Park Geun-hye.

In fact, the controversy surrounding Sejong could serve as a primer to South Korean politics. Its conception, its radical reconfigurings and the fury these have aroused say volumes about how power is gained and maintained here.

The whole political quagmire surrounding Sejong City is such a mess that I actually think I'm doing a public service by highlighting this article of Mr Choe's (who is, of course, doing the even bigger public service). The dauntingly complicated nature of this story is one reason why I rarely blog about it, except for the odd mention in the news roundup or the loose change posts.

If you want to see what's going on with this, and how difficult it will be to resolve — it involves money and land in Korea, so there's a recipe for endless strife — read this article.