Searching for the bones of a ghost 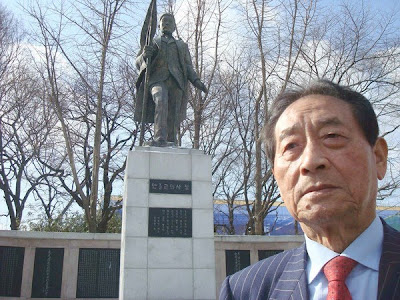 John Glionna of the Los Angeles Times has an interesting piece on seventy-nine-year-old Kim Young-kwang [김영광], a former intelligence officer who is trying to unlock the mystery of the location of the remains of An Chunggŭn [안중근], the Korean assassin who killed Japan's former Resident-General to Korea Itō Hirobumi because he blamed him for Imperial Japan taking over Korea:


For more than two decades, Kim has traveled across the region to sift through yellowing archives, interview witnesses and amass a vault of evidence, all in hopes of answering a nagging question:

Where are the remains of Ahn Jung-geun?

On Oct. 26, 1909, the 30-year-old Korean nationalist walked into a crowded train depot in Harbin, China, and fired six shots at Japanese statesman Ito Hirobumi. Three of the bullets hit their mark; Ahn had killed the man he blamed for Imperial Japan's move to annex his homeland. Five months later, an unrepentant Ahn was hanged in a prison in Japanese-occupied northeastern China.

Before going to the gallows, Ahn asked that his body be returned to his native Korea, a request denied by his captors, according to Japanese diplomatic documents.

From there, the record fades. Papers kept by Ahn's captors are unclear about where his body was buried.

The uncertainty has kept alive visceral feelings among both Japanese and Koreans -- about the assassination and Japan's 20th century record of imperialism. The emotions can't be put to rest, many feel, until Ahn receives a proper burial.

"This mystery is complicated because Ahn is such a polarizing historical figure," said Kim, now 79. "He is revered in Korea, but demonized in Japan."

I myself find An Chunggŭn to be someone who shouldn't be so highly respected, as I've stated here and here, but my judgement aside (and the judgement of no small number of Koreans, especially Catholics), it is true that he is considered among the highest in the pantheon of Korean patriots, one of Korea's few successful blows against a relentless oppressor back then, and so naturally stories like this occur.

I'm not so certain, however, that finding An's bones will put anything to rest.

Email ThisBlogThis!Share to TwitterShare to FacebookShare to Pinterest
Labels: An Chunggŭn, looking back on Imperial Japan