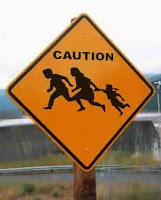 One thing I did like about then President George W. Bush is that he really did seem committed to immigration reform in a way that didn't demonize the illegal crossers and attempted to treat them with dignity. Too many Republicans hated the idea of rewarding even law-abiding illegals (that is, law-abiding except for their continued illegal stay in the US) and too many Democrats just couldn't stomach cooperating with Bush on anything.

President Obama, against what appear to be long odds, is working with two senators — one Dem and one Republican — to try to regain some traction on this campaign promise:


Obama and members of his Domestic Policy Council outlined ways to resuscitate the effort in a White House meeting with two senators -- Democrat Charles E. Schumer of New York and Republican Lindsey Graham of South Carolina -- who have spent months trying to craft a bill.

According to a person familiar with the meeting, the White House may ask Schumer and Graham to at least produce a blueprint that could be turned into legislative language.

The basis of a bill would include a path toward citizenship for the 10.8 million people living in the U.S. illegally. Citizenship would not be granted lightly, the White House said. Undocumented workers would need to register, pay taxes and pay a penalty for violating the law. Failure to comply might result in deportation.

Nick Shapiro, a White House spokesman, said the president's support for an immigration bill, which would also include improved border security, was "unwavering."

While I think there should be a practical way for long-term illegals to stay, we need to do something to block new illegals from coming back in. Sure, the economy is largely doing that for us, but there need to be other efforts, as well, such as harsh punishments for people who employ undocumented workers. And, I dare say, we might have to consider a national ID or at least a nationally implemented ID standard across the states and territories.

I'd like to see former President Bush get involved with this effort, which could go a long way toward salvaging his legacy.