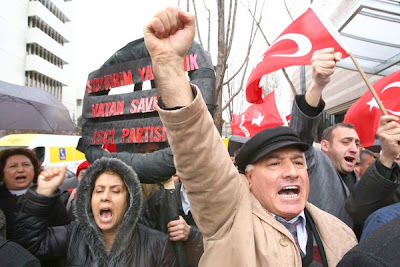 
Sponsors of a long-debated congressional resolution to officially recognize the Armenian genocide cleared a key hurdle by a one-vote margin Thursday, but face a tough battle ahead to bring the measure before the House.

The resolution passed the House Foreign Affairs Committee 23 to 22 over opposition from members of both parties who warned it could damage U.S. relations with Turkey, an important ally.

The Turkish government reacted immediately, recalling its ambassador, Namik Tan, in protest, and warning that the resolution's adoption "could adversely affect our cooperation." The United States has been seeking Turkey's support for new sanctions against Iran for its nuclear program.

Panel Chairman Howard L. Berman (D-Valley Village) pressed for the vote, even after receiving a call from Secretary of State Hillary Rodham Clinton expressing concern it could "impede progress on normalization of relations" between Turkey and Armenia, according to an administration spokesman.

The vote came in a packed meeting attended by three elderly genocide survivors, who support the measure. Pointing to the survivors -- ages 97, 98 and 105 -- Rep. Gary L. Ackerman (D-N.Y.) said, "They're here for justice. How long can they wait?"

Well, there's something to be said about righting wrongs (or at least acknowledging them), even if they've long since passed. And it takes some guts to do that when there is potential detriment to one's political or economic standing today.

Now if only Uncle Sam and the US Congress could recognize genocide happening today. Maybe they'll pass a meaningless resolution on North Korea in the year 2106.