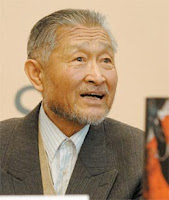 A big news story today is the release of a book by two AP reporters that includes stories by Kim Il-sung's and Kim Jong-il's personal shopper, a colonel in the DPRK military whose job was hanging around Austria and buying things for the Great Leader and the Dear Leader.

It's the guy on the left. Yep, that's whose fashion advice the Leaders trusted. Explains a lot.

From the Korea Herald:


Kim Jong Ryul, who spent 16 years under cover in Austria, also described how the ''great leader'' and his son and successor Kim Jong Il spent millions pampering and protecting themselves with Western goods _ everything from luxury cars, carpets and exotic foods, to monitors that can detect heartbeats of people hiding behind walls and gold-plated handguns.

AP reported that the colonel's account _ told in a new book by Austrian journalists Ingrid Steiner-Gashi and Dardan Gashi _ shows the deep divide between the lifestyles of the North Korean leadership and their citizens, who sometimes must subsist eating tree bark, knowing they will be sent to labor camps if they criticize the government.

Kim said this injustice was what motivated him in October 1994 to fake his death at the end of one of his trips and start a new, secret life in Austria in the hope that the oppressive regime would crumble within years, AP reported.