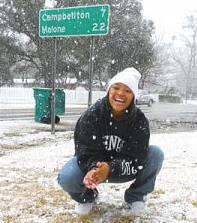 With some cold weather sweeping through the South, a lot of people were hoping for conditions to be just right that we could claim all fifty states had snow on the ground at the same time. Florida managed to get about an inch of snow up in the Panhandle [right].

But as it turns out, Hawaii was the one holdout, so the number was only forty-nine. Snow on the ground in Hawaii may seem like a strange thing to people who have never been here, but people who live in Hawaii know that the high mountains of the Big Island (reaching nearly 14,000 feet) do get snow quite regularly.

Even Haleakala on Maui (which barely reaches 10,000 feet) occasionally gets snow. It's even listed in ski-related sites:


Snow now falls quite rarely on Haleakala, apparently it had been 10 years since the previous snowfall when the last major snow occurred in January 2002, which melted within two days. Any skiing or snowboarding must be done with extreme caution, since with the very shallow snowpack it would be easy not only to injure oneself but also to severely damage the fragile plants and terrain of the summit area.

But just when Hawaii was needed for the sweep, it choked. There's no snow in the Aloha State today, so no fifty-for-fifty record. It is the 이호석 of snow states. Hang your kama'aiana heads in shame.

UPDATE:
Meanwhile, in Orange County, the temperature is nineteen degrees about normal, with people flocking to the beaches this Presidents Day weekend because it's 87°F inland! That's a little over 30°C. Even hotter than here in Hawaii (where they wind has been kicking up and making it cool enough that you need to wear long sleeves). SoCal's temperature fluctuations are a big part of winter. It doesn't get that cold, but if you go outside prepared for temperatures in the seventies and it drops into the forties, as often happens, you can be unprepared. Once or twice I left Seoul in the wintertime and it was colder when I arrived at LAX later that morning. 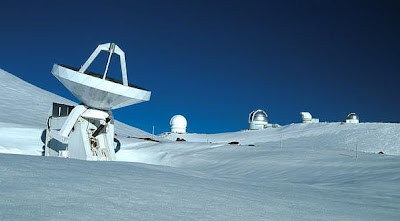 [above: A thick layer of the white stuff on Mauna Kea (where skiing is possible) sometimes covers the telescopes on the Big Island. This is when aliens sneak into our atmosphere.]