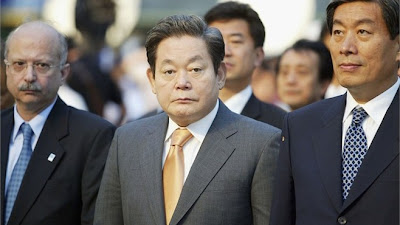 [above: The camera, spikes Lee.]
It seems that IOC head honcho Jacques Rogge thinks there's nothing wrong with former Samsung head honcho — who was convicted of tax evasion and then pardoned — regaining his seat on the IOC board. So says CTV:


Jacques Rogge on Monday defended the controversial reinstatement of former Samsung chief Lee Kun-Hee to the IOC, saying his amnesty by the Korean president on tax evasion charges meant he was cleared of wrongdoing.

The billionaire buisnessman, who voluntarily gave up his rights and duties as an IOC member in 2008 following his conviction, was pardoned by Korean President Lee Myung-Bak in December.

His reinstatement as a member of the International Olympic Committee came after a meeting of the body's executive board on the sidelines of the 2010 Winter Olympics on Sunday.

IOC president Rogge defended the move and dismissed concerns about the image of the Olympic body, which has long been tarnished by corruption allegations.

"Mr Lee was convicted in his country and was granted an amnesty. The amnesty alleviates the conseqeunces of the criminal office," he said.

While Lee was readmitted to the organisation, he was also issued with a reprimand and suspended from the right to sit on any IOC commission for five years.

I do wonder if Rogge's enthusiastic defense of Lee bodes well for Pyongychang's chances to host the 2018 Winter Olympiad. The third time's the charm!