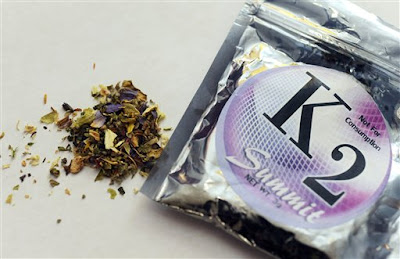 This past week several blogs (among them, Extra! Korea and The Marmot's Hole) have mentioned the news about K2, a marijuana-like substance that can be used as a substitute for pot because it's legal in the US. It's stupid, but it's legal:


Dr. John Huffman, a Clemson University organic chemistry professor, was researching the effects of cannabinoids on the brain when his work resulted in a 1995 paper that contained the method and ingredients used to make the compound. That recipe found its way to marijuana users, who replicated Huffman's work and began spraying it onto dried flowers, herbs and tobacco.

"People who use it are idiots," said Huffman, referring to K2 smokers.

Um, anyway, this is big news because the stuff is apparently manufactured in South Korea (and China) and then exported to the US:


The users are buying a product known as K2 - or "Spice," Genie" and "Zohai" - that is commonly sold in head shops as incense. Produced in China and Korea, the mixture of herbs and spices is sprayed with a synthetic compound chemically similar to THC, the psychoactive ingredient in marijuana. Users roll it up in joints or inhale it from pipes, just like the real thing.

Always helpful for the press to inform you how to take psychotropic substances. Anyway, I decided to blog this because I wanted to point out that this is by no means the first time "drugs" that have been manufactured in South Korea have made their way to the US and created a problem.

In fact, in the 1980s, South Korea (along with Taiwan) was a major exporter of methamphetamine to the US. Yeah, the same meth that is now a huge problem in rural America (where the good White trash folks have learned how to make it themselves):


Since the 1980s, ice has been smuggled from Taiwan and South Korea into Hawaii, where use became widespread by 1988. By 1990, distribution of ice had spread to the U.S. mainland

And ROK-produced meth is still a problem on Guam:


Crystal methamphetamine is readily available on Guam in gram to kilogram quantities because of a steady supply of the drug from the Philippines as well as from Hong Kong, China, Taiwan, and South Korea. The Drug Enforcement Administration (DEA) reports that the price of crystal methamphetamine at the retail level--while still high by mainland standards--decreased during the past few years.

You know what? I blame Japan.

Oh, man! I wonder if Felicity Huffman — intense happiness breathing in person — is a made-up stage name that's a wink and nod to getting high?