Gold is worth cash in South Korea

If you really want to know why Lee Hosuk [이호석] tried at the very last minute to pass his countryman to try to snatch a silver medal out of the jaws of a bronze, he was doing it for pension points.

For those of you who didn't know or forgot, South Korea's Olympic and national team athletes are treated like heroes and rewarded like civil servants for perpetuating the national honor: They are exempt from the dreaded military service (justifiable to a degree because they are doing a national service of a sort and their prime military years would also be prime competition years), and if they win gold, silver, or bronze, they receive lifelong (sort of*) financial benefits.

From the Korea Times:


According to Korea Sports Promotion Foundation (KSPF) policy, an Olympic gold medalist can earn 1 million won a month along with 90 pension points, while silver and bronze winners can make 450,000 won (30 points) and 300,000 (20), respectively.

And of course, there's a nothing-to-sneeze-at one-time payout for the medalists:


In addition to the pension and the bonuses, the medal winners will take a big wad of cash from the government and IOC member and former Samsung Chairman Lee Kun-hee.

This is big money. Paid over sixty years, that gold is worth 720 million won (and may go up according to inflation). If I had my house taken care of, I could live off 1 million won per month. Not extravagantly, but I'd eat well and enjoy myself. Heck, that's the life of a grad student.


And before anyone cries foul (hehe) for these athletes finally cashing in on their hard work, let's not forget that South Korean athletes — indeed the athletes in many countries — often don't get the hefty endorsement deals or even corporate sponsors that are commonplace for their star counterparts in the US. Apolo Ohno, for example, stands to make millions of dollars for putting his image on all kinds of stuff from McDonald's or Coke commercials to Alaska Airlines. The picture below is not photoshopped. 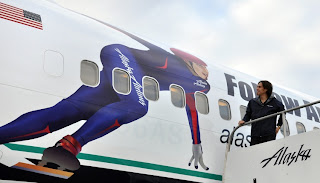 Okay, that does it. I'm never flying Alaska Air again (and I have flown them, so this threat ain't so empty... not as empty as your planes, AA!). No, no, no... I'm just kidding. Choosing not to buy some product or service because of a sporting event would be utterly stupid, dontcha think?
on February 19, 2010