A bigger threat than we thought

The Korea Times has just informed me that there are 13 billion people in China:


Out of China's 13 billion population, 8 billion are from the rural countryside, which stick to tradition firmly. And this poses an interesting problem for young men and women who work in urban areas and now need to return home to see their family in rural China.

Well, one "interesting problem" they'd face is where to put them all. No wonder they took over Tibet.

Rather than someone forgetting to put in a decimal between the 1 and the 3 (China actually has about 1.3 billion people), this is almost certainly a case of someone carelessly mistranslating ŏk [억/億; aka eok], 100 million, as billion.

Of course, this is something a thoughtful and careful proofreader should have caught, but the KT doesn't seem to have one anymore. The last one was fired after he corrected an article citing India's population — 1 billion, or 10 ŏk — as 10 WTFSTFUURANOOB.

Anyway, on the off chance the Korea Times decides to pull this down, here it is for posterity. 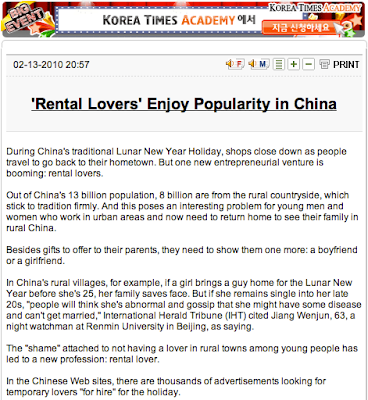