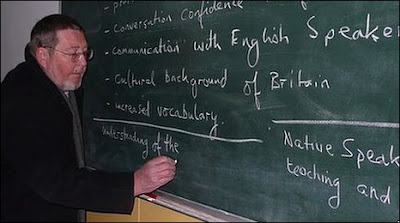 The BBC has a focus on teachers like Chris Lawrence, an English instructor in Pyongyang participating in a joint project between the British Council and Kim Ilsung University:


These days even the children of the party faithful can't escape some of the hardships of everyday life in North Korea.

"The main problem is a lack of heating," he said.

"Most of us in here are wearing our outdoor clothes as we work."

Chris is one of a small team of English teachers forming a joint project between the British Council and the Government in Pyongyang.

In a sign that it may one day open up to the Western world, North Korea has gradually shifted a lot of its language training away from Chinese and Russian and towards English.

The second header says that the students he teaches will one day be running North Korea, though I'm not so sure.

One also wonders where this kind of assistance would fall in the spectrum between eroding North Korea's grip by introducing foreign elements on the one hand and assisting the ruling DPRK elite in maintaining that grip. With teaching of foreign language, especially to help people go abroad where the law of unintended consequences has more of a chance to wreak havoc, I'm guessing it points more to the former than the latter. But I'm sure others would disagree.