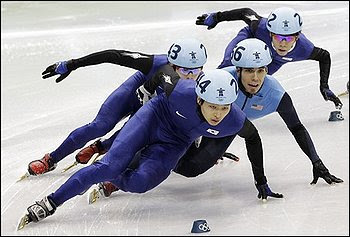 [above: Because of death threats, a team of South Korean skaters escorts Apolo Ohno everywhere he goes.]

By now you may have seen this AP story about how much South Koreans "revile" American skater and rival to South Korean supremacy in skating, Anton Apolo Ohno. Go take the time to read it; I'll wait.

This AP story was the kind of article that, had the situation been reversed and it was, say, a Korea Times article talking about some Korean athlete reviled by Americans, many people in the K-blogs would be all over it for its journalistic flaws — and rightly so.

For starters, it’s reporting on eight-year-old news as if it just happened. Second, it makes a rather serious accusation based on speculation — that hatred of Ohno has to do with his father being Japanese — that is not examined and treated uncritically as (virtual) fact.

And most importantly, it utterly ignores the person who, in the face of Ohno’s supposedly undeserved win, South Koreans are mostly critical of: 이호석. Indeed, this article is bandwagoning the KT articles from a few days ago.

Why is the KT considered gospel truth in cases where the message suits us, but it’s reviled as yellow journalism when we don’t like what it says about, say, English teachers. All this recent bashing on Koreans for bashing on Ohno essentially comes from two KT articles that do not reflect on what Korean media are saying about Ohno.

Yet this will go down in the annals of K-blog history as Koreans bashing Ohno for their own countrymen mucking up a race.

UPDATE:
As if to underscore my point about sloppy incestuous journalism, the Seattle Times recounts the AP story by saying that South Koreans refer to Mr Ohno not as the "king of fouls," but as the "king of fools." Way to go, ST.

UPDATE 2:
The Seattle Times has fixed that.