I could hear it all the way over here 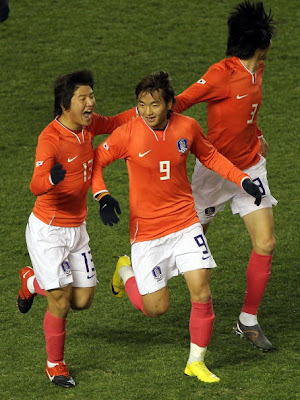 South Korea has defeated Japan, 3-1, in the East Asian Championship for men's soccer. A nice little new televised year's gift that beats saetton, I suppose, and probably got a few hearts beating hard on Valentine's Day.

Of course, it was China that went on to win the entire tournament, thus heralding at least a century of Big Brother China-dominated political dominance of the region (that's what soccer is all about, right?), but the victory over Japan is enough for most.

Well, actually, the converse is true: It's not so much that South Koreans will be giddy for a long time about the victory, but a lot of people would have felt quite dejected for a while — perhaps until the next KOR-JPN match-up — had South Korea lost.

UPDATE:
The Joongang Daily story on the win is here.

Email ThisBlogThis!Share to TwitterShare to FacebookShare to Pinterest
Labels: Are you ready for some futbol?