LAT on the sucky world of being a reporter in Korea

The system is broken, and newbies learn to be cogs in that dysfunctional system. From the Los Angeles Times:


The young college graduate acknowledges that she has a job with pretty demanding hours -- like 3:30 a.m. to 3:30 a.m.

Sometimes, to get any shut-eye at all, she shares a bed with a bunch of other trainees. Then there's the minder who rules her every moment, even in the shower, not to mention the marathon drinking sessions to get her in fighting shape.

At 23, she's a cub reporter slogging her way through a grueling round-the-clock journalism training program that often plays out more like a college fraternity hazing. It's a sink-or-swim test of willpower and stamina designed to prepare young wire service, newspaper and television writers for survival in South Korea's no-holds-barred news culture.

"I think the toughest part is not being able to sleep," said the woman, running to another late afternoon court hearing at an hour when most workers were heading home. "That affects a lot of other things. Most nights, I feel lucky if I can sneak in three hours."

The decades-old program is loosely organized among a handful of news outlets in Seoul. Not every news company participates, but those that do send all new hires -- an annual total of 100 to 200 cubs -- to spend as long as six months proving their mettle.

They are assigned to various police stations where they eat, sleep and bang out their stories on crime, courts and hospitals on laptop computers. 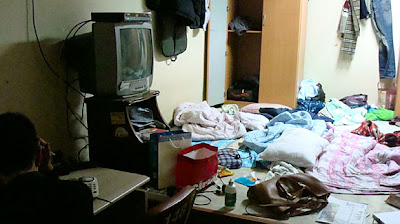 Just like so many other industries in Korea, this one requires camel-going-through-the-eye-of-a-needle effort to get in, and this fosters a sense of entitlement among some of those who succeed. It also can lead to resentment against those who did not get there based on their own hard work, wits, sweat, and sleep deprivation (e.g., privileged kids or Westerners, depending on the industry).

If you ever have a legal or criminal matter that brings you to a police station, you might find these cubs or their barely senior seniors. Sometimes they unscrupulously feign being police officers and get you to reveal information. Other times, though, they can be sympathetic people who can help you avoid trouble.

Email ThisBlogThis!Share to TwitterShare to FacebookShare to Pinterest
Labels: journalism 101