As Ohno supporters might say, a gold is a gold (as I said of Ohno being a good skater who deserves his medal, "a silver is a silver"). Lee Seunghoon [Yi Sŭng•hun, 이숭훈] was four seconds behind Sven Kramer, but he did come in ahead of everyone else (setting a new Olympic record) and he avoided being disqualified. 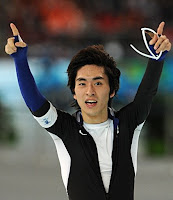 And just as Kim Dongsung threw his country's flag down in 2002, the disqualified Dutch skater "threw his goggles down in disgust."

Kramer, who won 5,000m gold last week, was the hot favourite and he lived up to his billing by powering around the Richmond Oval more than four seconds faster than Lee in the gruelling race.

He thought he had won but a lane infringement with eight laps left saw him disqualified, ending his dream of completing the first golden treble by an Olympic speedskater since Norway's Johann Olav Koss in 1994.

Kramer, the 23-year-old son of two-time Dutch Olympic speedskater Yep Kramer, threw his goggles down in disgust and was a forlorn figure as Lee celebrated an unexpected victory.

Kramer also blamed his own coach:


"Usually, I don't want to blame anyone else, but this time I can't do anything else. I wanted to go on the outer lane then just before the cone Gerard shouted 'inner lane,' I thought he's probably right and went to the inner lane," he said.

"At first I thought my skates passed the cone on the wrong side, I will be disqualified. Then I noticed in the stadium something was wrong.

"You have to decide in a split second. Afterwards I should have gone with my own thoughts, but I was brought into doubt. This really sucks. This is a real expensive mistake." 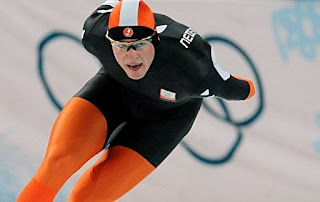 There may be some truth in what he's saying, so I'm not about to write that off as unsportsmanlike activity. As I said before, the biochemical rush going through these skaters when they finish provides reasonable cover for their post-race tantrums:


Lee Dong-sung, back in the 2002 Olympics, was unsportsmanlike for throwing down the t'aegŭkki when it turned out he got disqualified after coming in first in Salt Lake. I'll excuse him, though, based on the undoubtedly high level of adrenaline pumping through his veins just then. Some will say I'm a hypocrite, because I'm not willing to accept the same excuse for police officers who shoot suspects they've chased into an alley, but come on, there's a difference between throwing down a flag and putting twenty-five bullets in someone carrying an ice cream cone you thought was a rocket launcher.

No doubt some will see hypocrisy in Lee happily accepting this gold medal, but I don't think it is, for a variety of reasons. First, Lee Seunghoon was not (to my knowledge) one of those saying Ohno was undeserving. Second, Lee Seunghoon was not instrumental in Mr Kramer getting disqualified in the way that Ohno was instrumental in getting Kim Dongsung disqualified so he could win the gold in 2002. Rather different cases, methinks.

Of course, I have yet to see the race, and I don't know if I would recognize a foul by Lee if he'd made one, but from what I have to work with now, I don't think there's hypocrisy.