The LAT on Kim Yuna: "A champion for all time" 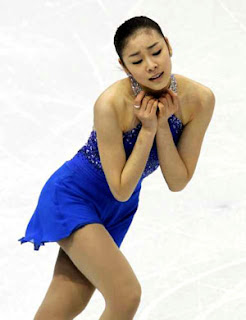 If you can stomach any more of this, the Los Angeles Times has a piece on the enduring greatness of Kim Yuna:


The skater and her coach were in a car going from post-competition doping control to a press conference that would be aired live in South Korea, where half the country's 48 million people already had watched TV broadcasts of their national hero becoming their first Olympic figure skating champion.

During the 20-minute ride, Kim and Orser simply could have sat back and looked at the gold medal she won three hours earlier with a performance of record-breaking, mind-boggling quality. Instead, as Orser sat in a front seat and Kim in the back, they leaned together to study details on the score sheet, talking about places to improve in her next competition, the March World Championships.

That discussion speaks to the particular greatness Kim displayed in the Olympics.

If, at age 19, she already has joined the sport's legends, it will owe not only to Kim's lighter-than-air grace in her movements on the ice and her huge jumps but also to Team Kim's grounding in the demands of figure skating's scoring system.

Never have athlete and artist been more perfectly balanced than they are with Kim. Never has a skater with both those qualities displayed them so flawlessly in the sport's most important competition.

"I always wanted to be Olympic champion and do clean programs," Kim said. "This was the first time I have done both programs clean, and I am very joyful it was at the Olympics."

That achievement alone sets her apart from many of the sport's greats, especially because they had to do far fewer defined elements in a four-minute program that used to embody its title: free skate.

I forgot where I read it, but someone in one of the K-blogs made a point that Kim Yuna represents a worthy goal for so many Korean girls and women now: She achieved what she did through her own hard work, her wits, her intelligence, her perseverance, etc., not a trust fund, a rich husband, or going to the right school (I'm paraphrasing).

As she alludes to above, this was a victory devoid of controversy or even mistake: No one (except for a few disgruntled Mao Asada fans whose lack of class does not represent Japan as a whole) questions that she earned it. That makes it kinda neat by itself, even if she weren't a "queen" of skating: It's a demonstration that thoroughgoing attention to detail and doing things the right way (versus cutting corners to get ahead, is the path to good things (although it might add fuel to the fire for South Korea's we-must-be-perfect-or-else-we've-failed crowd).