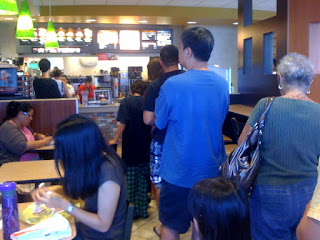 I guess people don't want to mess with cooking today.

Anyway, I thought this would be a good space for listing my lame, personal observations and experiences.

Anyway, I decided to hop in the car and head for the McDonald's on Waialae and Palolo. I usually walk there, but I decided to get in the car so that (a) I could listen to the radio and (b) I could head toward the eastern end of Waialae to assuage my concerns that 3rd and Waialae might be in a danger zone. After checking it out myself, the hump on Waialae around 12th avenue and Koko Head Avenue appears to be high enough to block any wall of water that would come from that direction.

The first thing I heard when I turned on the radio was Governor Linda Lingle telling us that we should stay off the roads. Yeah, I heard the same thing during the earthquake, too. But Waialae is not a hotbed of emergency evacuation activity, so I don't think I was impeding anything.

Actually, that was the second thing I heard. The first thing I heard was 93.1 playing pop music. It was KRTR that had preempted their music with emergency information.

The governor was deftly laying out what people need to do, assuring everyone that these emergency plans weren't drawn up last night, and telling us to get out of the way and let the police, fire, EMTs, etc., do their work. Governor Lingle really does sound like she's on top of things.

The DJs are passing along news and information, including reports that in Waikiki the civil defense sirens did not go off. Actually, they explained, the people who said this had it slightly wrong: They were just run for a second or two because, well, they didn't want to alarm people. Not at 6 a.m., anyway, when all they have to do is head up a few floors sometime around 11 a.m.

There are some worries about people living along the beaches (we don't call them homeless here, apparently) and whether they can be reached. The DJs also noted that on this warm, sunny day, it sucks because the beaches are closed, but so are the main shopping venues — Ala Moana Mall, Ward Center, Waikele Outlets, Windward Mall on the other side of Oahu, etc. 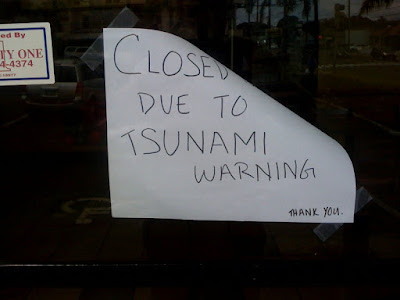 [above: The Subway sandwich shop right here closed in the morning and stayed closed all day.]

But if you really need to shop, Kahala Mall is open. That's a bit of a relief for me because Kahala is not far from here, and it probably is a good indication of the safety of this area.

They already have reports of six-foot tsunami waves hitting French Polynesia, but no major damage reported so far. They're pretty confident that that means similar sized waves will hit us.

Meanwhile, McDonald's was pretty crowded. The drive-thru line spilled out onto Waialae, which is the longest I've ever seen it, and I couldn't get a parking spot in their too-tiny lot, so I had to park along the nearby residential street (Palolo). The line was about three times longer than usual, but it went fairly quickly. They still had breakfast burritos and, yes, their Spam™ offerings. They've also got coffee, so head there, Goku!

While I was parking, I get a text from one of my brothers in California telling me that his call wouldn't go through. I texted him back telling him I was inland and at reasonably high ground, so not to worry. I texted my mother and told her the same, but for good measure I called her. I was able to get through — maybe because we both have AT&T but my brother and I have different service — and assured her that everything's okay. Apparently a lot of people are trying to make calls like that, hence the problems. I imagine right around 11:30 it will be the same.

And now the 10:30 a.m. siren is going off, and this one is long. They're taking this seriously. Now you have less than an hour to get out of harm's way.

UPDATE (11:07 a.m.):
That was a really long siren. Lots of helicopters overhead a minute ago.

UPDATE 2 (11:50 a.m.):
I'm trying to get online to see if I can see anything, but Honolulu Advertiser links seem to be down, and KHNL and KHON don't have anything about stuff being struck yet. Just a moment ago I heard a strange "distant whisper" kind of sound, and I don't know if I'm just sensitive to every little sound or if that really was something.

UPDATE 3 (12:18 p.m.):
In hindsight, I think that "whisper" was just my imagination. The live feed at KGMB is showing the police blocking people from driving into Waikiki.

UPDATE 4 (2:23 p.m.):
As of 1:38, the tsunami warning has been canceled. I'm only posting that just now because that's how exciting this was after a while (plus the were waking me up with sirens from early this a.m., so what do you expect?).

I hereby declare this the H1N1 of tsunami warnings: A lot of preparation for just a little punch — but as a public health person, I mean that in the nicest way. Meanwhile, I wish I'd had plans to see the UH-versus-Nevada basketball game, which is now back on. 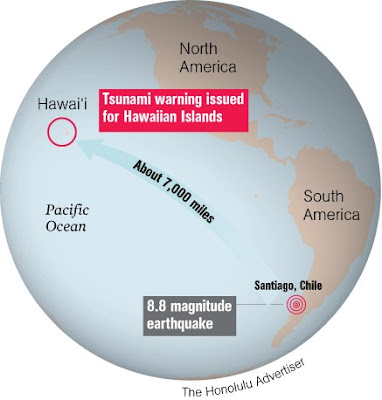 [above: You can see from this graphic how far the Hawaiian Islands are from the epicenter of the quake in Chile, some 7000 miles away. Even farther is the Honolulu Advertiser, which is located closer to Antarctica, a fact that would explain their serious troubles.]