Paradigms not worth a pair of dimes

One of the memes in the K-blogs is that if you're ethnic Korean and you do something great, the Korean media will hail you (à la NFL star Hines Ward) as a Great Korean Hero™. But if you do something bad (à la David Nam), then you are an American, Canadian, or countryman of wherever you're from. 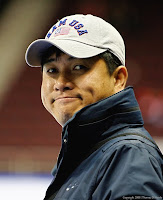 So why isn't Jae Su Chun given more media attention in Korea? He's a Korean-American (or merely an overseas Korean?) who is the head coach of the US team — a position he took after being dismissed as coach of the ROK national team prior to the Torino games in 2006 and then serving as coach of the Canadian team.

With Ohno, at least, he's producing results, which makes it a Korean success story, sort of. Is it that the white-hot hatred some Koreans have of Ohno makes Chun radioactive?

At any rate, Jae Su Chun's contribution to the US effort should not be underestimated. To put it plainly, if they didn't have Jae Su, they'd be Jae Su 없어.