Would it be that hard to spell it kyopo instead?

In the latest in their series on clichés about South Korea, the Los Angeles Times tackles the notion of how kyopo (ethnic Koreans not living in Korea) are caught between two worlds, being Korean and not Korean at the same time, and often held to impossible standards. An excerpt:


After graduating in 2008 from the University of Wisconsin with a triple major -- journalism, history and political science -- she became one of many ethnic Koreans raised abroad who return to explore their heritage. 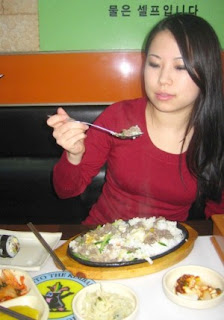 Some come to earn money and brush up on their Korean or to please their parents. Babe took a job teaching English to learn about her roots.

What she found was a culture quite unlike that in the United States. And though she appreciates the sense of community extended to returning ethnic Koreans, at times she still felt like a stranger.

"I think that Korean culture is beautiful in the sense that they are so strongly committed to one another, but they are also community-oriented to a fault," she said. "They don't allow people to be individuals as much as I think is necessary."

In South Korea, returnees such as Babe are known as gyopo.

The term connotes "our Koreans who happen to be living overseas in another country," said David Kang, a second-generation Korean American and director of Korean studies at USC.

He emphasized the tribal focus of the word: "It's this very atavistic view of Koreans as our blood overseas, almost."

For some ethnic Koreans who come here, the term gyopo has carried a negative connotation, singling them out. But most accept it as a practical label.

The article also tackles the downside of the double standard that many kyopo encounter:


But gyopo who look Korean but behave in a "non-Korean" way may be a target of discrimination.

Kang also pointed out Koreans' tolerance for most other foreigners' behavior: "If you're white, you can get away with almost anything."

Babe acknowledged that she often misses out on some of the perks enjoyed by her non-Korean peers. South Koreans often will offer directions to confused foreigners, not presumed kinsmen.

Looking Korean has affected her employment opportunities as well.

Many English teaching positions posted on the Internet include "no gyopo" clauses. "They don't fully understand that speaking and appearance are not really related," she said of employers.

I'm not so sure if Whites would agree that they can get away with almost anything. A kyopo male with a Korean female won't warrant a second glance, but a White male with a Korean female might invite double-takes, staring, or worse. Indeed, perhaps it's a grass-is-greener thing at work here: many Whites long for the racial transparency they enjoyed back home, while a great many kyopo see the newfound racial inclusion as a burden — a huge distraction from the benefits of racial transparency they'd find in Korea.

And really, kyopo is such a more accurate rendering of 교포 than gyopo, which would be more like 꾜포, if there were such a thing. Bring back McCune-Reischauer, for all our sakes!