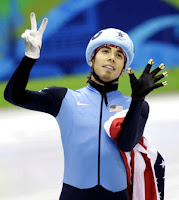 Lee Jung-su grabbed another gold, this time in the men's 1000-meter short-track speedskating, while Lee Hosuk may have redeemed himself by getting the silver. CNN has the story here.

I haven't seen the race yet, so I wonder if bronze medalist Apolo Ohno skated around with the American flag, whooping and hollering about his third-place showing that earned him the title of most-decorated American winter Olympian (he's only seventh winter Olympian overall). Maybe Celski was conducting an interview he could interrupt.

Anyway, regardless of where he placed, Ohno's record is nothing to scoff at. He may be a smug sombitch, but he's an impressive skater, and his recognition was hard-earned.