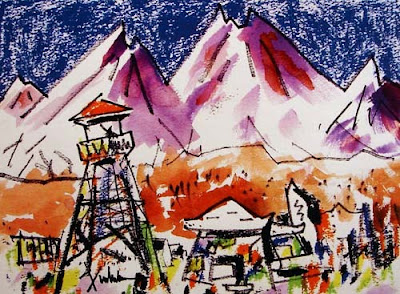 Henry Fukuhara, an Orange County-based water colorist who highlighted the Manzanar internment camp in eastern California's Owens Valley, died two weeks ago of natural causes at the age of 96:


Fukuhara started the Manzanar workshops in 1998, taking participants -- many of whom had been interned at Manzanar -- on painting excursions to various outdoor sites around the camp, including the Alabama Hills and the nearby town of Lone Pine.

The workshops, which have attracted about 80 participants a year, featured demonstrations by Fukuhara and other noted artists, including the late Milford Zornes, a leader of the California watercolor movement.

One of 10 children of Japanese immigrants, Fukuhara was born on April 25, 1913, in the Humboldt County town of Fruitland. He was encouraged to pursue his talent in art by a teacher at Santa Monica High School. After graduating in 1931, he enrolled at Otis Art Institute but was forced to drop out after a few months to help support his family through the Depression years.

Despite the hardships of the era, he kept up with his art and in 1936 had a show of linoleum block prints at what later became the Los Angeles County Museum of Art. A Times critic wrote that Fukuhara's landscapes had "a classical feel, real character and poetry."

In 1941, his family, which owned a retail nursery in Los Angeles, was just beginning to regain its financial footing when the Japanese attack on Pearl Harbor launched the United States into World War II. They managed to sell the nursery and store some personal belongings before arriving at Manzanar in April 1942.

By then a husband and father, Fukuhara worked in the camp's drafting department, surveying plots for graves. "Seemed like a joke," he told The Times in 1992, "but that's what we did." He lived in one room with his wife, daughter, parents, brother and sister-in-law.

In 1943, when internees who agreed to move away from the West Coast were permitted to leave the camp, Fukuhara and his family departed for Long Island, N.Y. With his father and brother he started a flower business that prospered over the next four decades.

In 1972, while recuperating from an operation, Fukuhara began painting. He studied with prominent watercolor artists and teachers on the East and West coasts, including Edgar Whitney, Robert E. Wood, Rex Brandt, George Post and Carl Molno. He began giving his own workshops before retiring from the flower business and moving back to Santa Monica in 1989.

Paintings of the Santa Monica Pier and other local scenes soon filled the house where he grew up. But in the mid-1990s, his thoughts returned to Manzanar. He organized the first workshop to raise funds for a committee dedicated to preserving the camp as a historic site.